Ripping Out The Roof Canvas

I haven't been everywhere, but it's on my list.
Susan Sontag 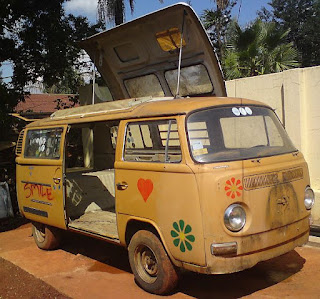 About a billion or so tiny, rusty bolts to remove, nearly half of them sheared off before I managed to loosen the nuts beneath. The canvas/vinyl was in such poor shape that it'll be completely replaced. We've also removed the bumpers, wipers and a few other bits.

The side cupboards have been dismantled and removed. Just a few more plywood trim panels and the two upper bunk beds to remove and we're done. I've left the Dormobile pop-up roof on for the time being to keep the rain out but it shall get a full restoration too, in time.

Thanks for stopping by
CooP
Posted by 2 CooPs at 16:20 No comments:

To awaken quite alone in a strange town is one of the pleasantest sensations in the world. You are surrounded by adventure. You have no idea what is in store.
Freya Stark 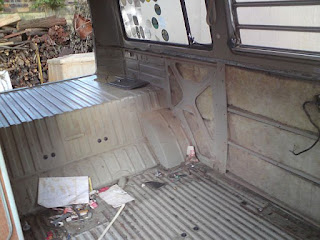 The Rock 'n Roll Bed, the side panels and the plywood floor have been removed. There was loads of lovely insulation between the plywood wall panels and the exterior steel skin. All of the crap seen here on the floor was caught up between the bed and the cupboard, including a love letter addressed to my little sis from 1978! The rear interior is in far better condition than I had imagined and won't need a lot of work to tidy up. Just wait 'til we look underneath!

Thanks for stopping by
CooP
Posted by 2 CooPs at 13:21 No comments: 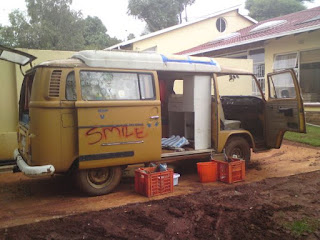 At last. All of the hard work on the concrete slab seems worthwhile. The old girl actually jump-started on the first attempt and drove up here under her own power! Very exciting with loads of wheelspin when trying to get up the muddy ramp. The dustbin bag taped to the roof is cover the hole left by a missing skylight. The skylight was left ajar when we drove to a music festival in Heidelberg, it blew away with a loud bang while we were tootling down the freeway. 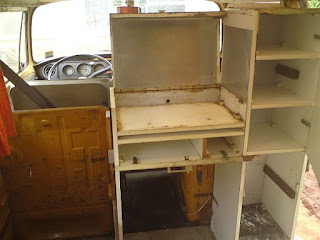 The Sorry State of the Cupboards
In this picture they just look filthy, but they are actually quite rotten and swollen from water damage. The fixing screws and bolts are all loose and the melamine surfacing is peeling off. I'll probably only keep these long enough to use as a pattern for the new ones. 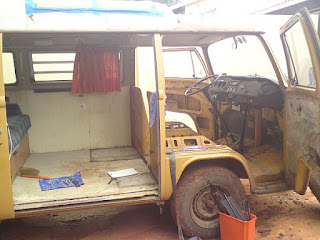 Stripping Out The Interior
The forward cupboards and the "dicky seat" have been removed, as have the front seats, mats, curtains and door trims. The lower seatbest mounts were so badly rusted that I had to soak them in good old Q20 for a couple of days before I could remove them.

All I seek, the heaven above and the road below me.
Robert Louis Stevenson 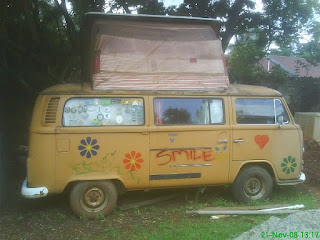 Pop-top raised for inspection. Oh dear, it is as bad as I expected. It's in pretty bad shape - the vinyl has become brittle and has cracked in a few places. Lots of work to do there. There seems to be some badly-repaired damage to the rear metal roof as well. The body filler has cracked and come slightly loose, allowing rust to creep in.

The Mission
To modify this 1972 VW Kombi by installing a diesel engine that has been converted to run on waste vegetable oil (WVO) using a kit available from GreaseCar.com. 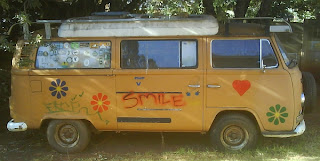 The History
Known affectionately as "Marigold", the Kombi camper was originally built in Germany and finished and fitted by Westfalia in 1972. She has a Dormobile side-tilt roof, unlike most of the Westies seen in the USA. A couple of newlyweds allegedly bought her and spent a honeymoon year driving overland to Cape Town. They then sold her and flew home.

She spent the next 30 years in my father's hands, travelling the entire southern Africa region as a holiday vehicle. She landed up in my back yard a few years ago as my dad bought a roomier caravan for his retirement travels. I have used her for occasional visits to music festivals and rallies but she is in dire need of a major overhaul as she is very tired.

The engine originally put out a mighty 36 horsepower, according to the manual. I haven't done a dyno test but I'll bet that it doesn't make 25 at the moment. I have been fascinated by the idea of running a car on WVO after seeing a Cape Town bloke on TV who has done a similar conversion to his old Mercedes. I have researched the various options and the GreaseCar conversion is my favourite at the moment. 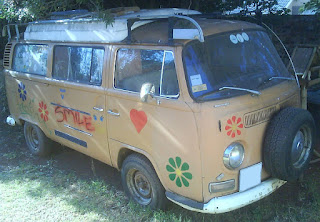 The Details
I hope, eventually, to install a turbocharged 2.2 litre Toyota diesel engine. This decision was partly made by a friend (thanks Louis!) who has done this conversion previously and has donated the compatible bellhousing, adapter and crossmember for this motor.
I would, of course, prefer a VW TDi engine but simply cannot afford it at this time. 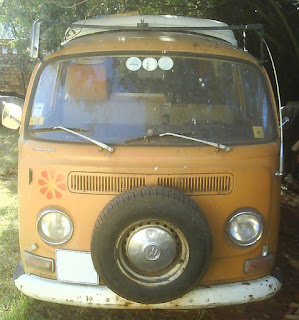 The Challenge
Just look at the pictures - we've got a long way to go!

Thanks for stopping by
CooP
August 2008 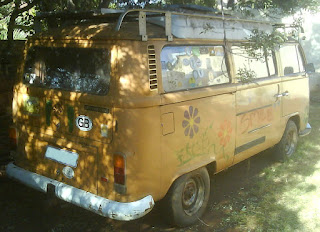 A traveller. I love his title. A traveller is to be reverenced as such. His profession is the best symbol of our life. Going from - toward; it is the history of every one of us. It is a great art to saunter.
Henry David Thoreau


Welcome to The Marigold Project.

I shall chronicle the progress of the build and restoration of my 1972 Westfalia VW Kombi. I hope you enjoy the journey. Please feel free to leave a comment or question after your visit.