I'm Back - Engine Out

Man cannot discover new oceans unless he has the courage to lose sight of the shore.
Andre Gide


Update
Seemingly endless torrential rain left me in a very fed-up state and I've neglected the project for far too long. I've been employed six days a week and have not had a lot of spare time. Excuses excuses!

One of my VW-crazy neighbours has motivated me to get cracking again and even offered to help out with tools, time and labour - thanks Marius! I'll come and help you with yours on alternate Wednesdays. Ah yes, the good old barter system.

He has persuaded me that I'd me a lot more motivated if I was actually driving the beast so my immediate focus will be on engine, running gear, brakes and linkages. 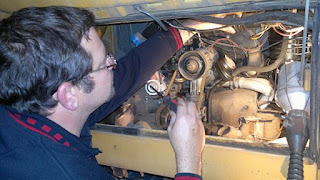 Marius has popped over with his toolbox and his "hard-labour" head screwed firmly on. He almost single handedly removed all the dirty bits and crawled around on the cold floor to loosen all of the right bolts. 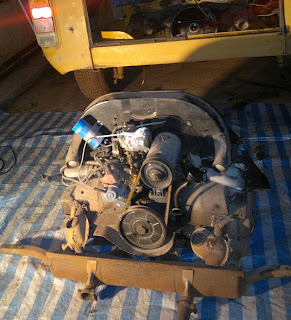 After lots of hemming and hawing and re-checking the manual (a.k.a. book of lies) we managed to find the correct bolts. Then it was just a "heave"and a "ho" and she was out on the floor. Lots of little bits to buy for the engine, mostly rubbery ones, yee-haaaaw. Next the fuel tank is coming out...


Thanks for stopping by
CooP
Posted by 2 CooPs at 20:45 No comments: