The world is a book and those who do not travel read only one page.
St. Augustine

I was really worked up for the big move today, exciting stuff for an old fart like me. I got the ever-friendly and helpful neighbour Marius along to help with some diesel pulling power. And he brought his dad-in-law Pieter for support, thanks to you both for the help.

When I originally fitted the poles to the car port I managed to hit an underground pipe so I moved the centre pole a little further to the right than I originally intended. I calculated that Marigold should just be able to squeeze out. WRONG! 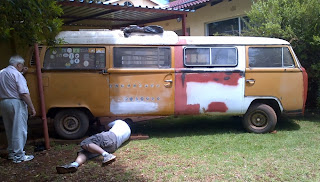 I only miscalculated by about 2 centimetres, so close but so useless. After mucking about with jacks and ramps for half an hour we just decided to lop the pole off at the bottom and bend it out of the way. It's just going to be quicker and easier to weld it back later.

And she's out! Away from the back and into the front garden. For the first time ever I can take a photograph of the full left-hand side.

And we stumble straight into our next problem - the grass is sodden and the ground beneath is slick, soggy clay. Great if we were re-enacting "Ghost" but hopeless for towing a tonne and half of dead weight up a 30 degree slope. Despite the awesome turbo-diesel power of the Isuzu and letting the tyres way down we only managed to achieve a lot of noise and splattered, muddy mess. We just couldn't get over the ridge at the gate and all we managed to do was create violent wheelspin and flying lumps of garden. Think, think, think...

Aha, Marius just remembered that he has an interesting souvenir left-over from his 4x4 days - a rather oddly named thing called a "snatch strap". Stop drooling at the back, it's not what you think. He joined this fearsome 7 metre long bungee to both vehicles and set off up the hill at full speed.

In the driving position in Marigold I was not really told what to expect. So it was only when the Isuzu reached the main road and I was airborne like a kite behind it that I realised that the loud "clank" was the sound of both of my eyeballs landing in the same socket after bouncing off the back of my skull. What a fearsome and unexpected launch. Next time I'll be certain to ask more questions before offering to sample any equipment that seems to have been designed by a sadistic bondage expert.

Never mind, despite the extreme lift-off we managed to come down to Earth with a safe landing and well clear of the gates and the muddy ditch. The contents of the bus had taken a step towards the rear tailgate, as had the fibre-glass roof. (See the pic above and compare to the previous pic.) But no permanent damage has ensued and we're out! Three frustrating hours but I do like a happy ending. A safe and gentle tow around the corner to Marius' house where he has kindly offered storage space for the next period.

What a thrill to be behind the wheel and actually steering the project on a real road. Ok we were taking it really easy - slower than a tortoise off a lettuce - but still, very exciting to be using steering and brakes for the first time in this four-and-a-half-year project.

To Marius and his family, thanks again for all the help mate! Much obliged. 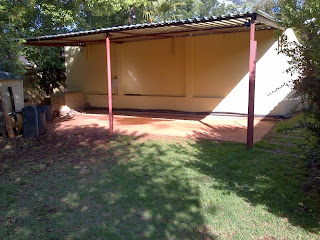 And my newly completed car-port stands forlorn and empty. It's a bit sad that I managed to get my working conditions so right, just in time to move out!

As usual, click on the images for a slightly larger version.


Thanks for stopping by
CooP
Posted by 2 CooPs at 13:11 No comments:

We make ourselves rich by making our wants few.
Henry Thoreau


Well it took a bit of effort and a few short-cuts but Marigold is back on all fours and crouched for the imminent move. The tyres are bit soft and the brakes are bit rusty-dusty but she'll be towed away this weekend to her temporary residence nearby. I'll give you an update shortly when we hit the road! 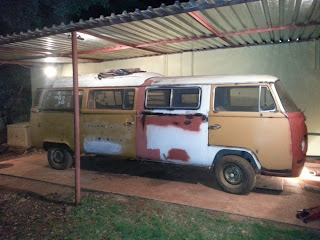