Some keen readers have kindly allowed me to post pics of their own projects. I hope that you enjoy them as much as I do. 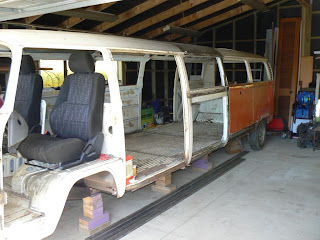 Daniel's Super Stretch
This is one of the greatest stretch projects that I am aware of. Daniel is in New Zealand and has nearly doubled the length of his bay window bus. He plans to install a Toyota V8 engine for some extra push. As with so many of us, progress is slow but steady. See his update pages at http://stretchedkombi.blogspot.com/. 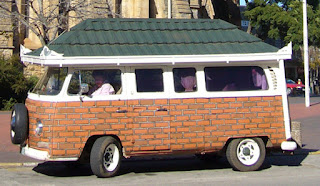 Stavie's "Hardtop"
Stavie has owned and driven this 1968 Lowlight Bay bus since 1972. Stavie is a builder by trade and built this wild roof when the original fibre-glass one blew off in 1988! 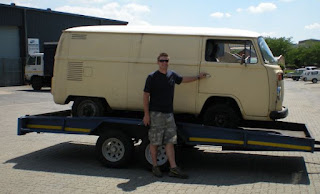 Hendrik's Hybrid
Hendrik just bought this SA-built hybrid bay/split. It has a 1976 highlight bay front with the older splittie rear and cargo doors. Very different and interesting. Update It won't be a project as he returned it to the previous owner owing to difficulties with the papers. 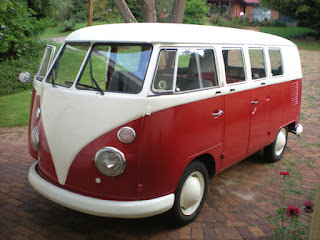 Marius' 1965 Splittie
Thanks Marius for bringing "Flossie"* over to show to me and for the spin around the suburbs! She was bought from the original owner on a farm in the Karoo. She had very little rust, was lovingly tidied and repainted and is driven regularly.
* Afrikaans language name meaning floozy, presumably so named because she is cheap and gets ridden often. 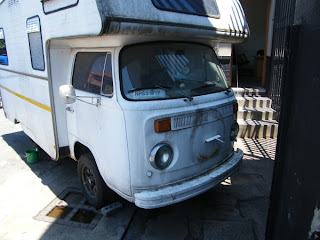 This locally designed and built Autovilla belongs to reader Dennis. Just a little tidying up needed and she'll be like new again. Thanks for the pics Dennis - please keep us updated :)