If you wish to travel far and fast, travel light. Take off all your envies, jealousies, unforgiveness, selfishness, and fears.
Glenn Clark 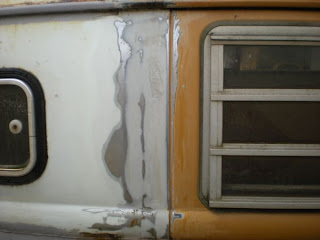 I cleaned off all of the rust across the roof and the main left-hand welded join and slapped a layer of filler over it all. I spent most of Easter weekend rubbing it down in preparation for the second filling. Of course it rained all day Monday so I am under attack from the dreaded rust again! When will this rain ever end?


Thanks for stopping by
CooP
Posted by 2 CooPs at 20:09 No comments:

Once you have travelled, the voyage never ends, but is played out over and over again in the quietest chambers. The mind can never break off from the journey.
Pat Conroy

This is a scratch in the right side of the bus. It has caused a long dent as well. I beat out the dent with some panel-beating hammers and dollies that I have on loan (thanks Dino). I then filled the remaining, shallow dent with some body filler and sanded it smooth. 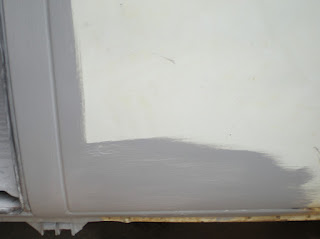 I have added and sanded a second layer of filler on the welded join. I have also smoothed off the filler in the dent and slapped on two coats of primer to keep it clean. Yes, with a brush, don't worry about it now. It'll be all right. The business of sanding and smoothing the filler is much tougher than I expected. It's going to take longer than I thought... 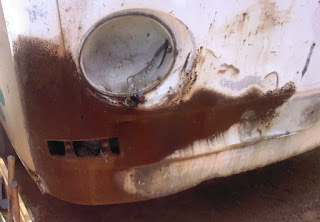 And I still have this mess to look forward to - oh joy!

Thanks for stopping by
CooP
Posted by 2 CooPs at 21:06 No comments: