Man is free at the moment he wishes to be.
Voltaire


Well we've had the engine out yet again! Getting the hang of it now, took less than 40 minutes. I fitted two shiny new studs into the partially stripped sockets at the lower end of the engine and glued them in with Pratley Steel epoxy. After setting for two hours we refitted the engine and tightened up all of the bolts except the two new ones. I'll let the glue set for a few days first before I tighten the nuts on that. 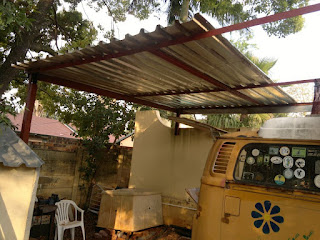 I'm making some progress with the roofing. It's not all square and perfect but it's made from donated scrap and has cost practically nada so far. It should help to form a barrier between me and the weather. It's certainly helping to keep the leaves and crap landing on the project - it's already covered in litter! 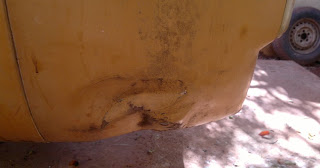 I discovered this nasty dent at the left-rear of the bus. Will need some attention before I put the bumpers back I suppose...later.


Thanks for stopping by
CooP
Posted by 2 CooPs at 11:03 No comments: