Not until we are lost do we begin to understand ourselves.
Henry David Thoreau


Ah yes, I have hundreds of loose ends. I have started documenting all of the little odd jobs that need to be finished. My memory is getting a bit dodgy so a written record can only help. 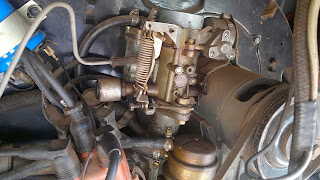 Despite remakes of my new control cables I managed to get the measurements wrong again, if only by a smidgen. So the end of the accelerator cable was refinished with a small plate of sheet metal and some molten solder. It was all expertly rolled around the end of the cable and fitted. It's not particularly pretty but it works and should be good for years to come. Good stuff.

Next task was the handbrake cables. Also remade, they are unfortunately about 2.5cm (1 inch) too long for comfortable adjustment. We made up some simple spacers by drilling holes through the length of some 12mm square steel bar. We then fitted them as spacers beneath beneath the front adjusters at the base of the handbrake lever. Another job has been jobbed!

Next up was the rear brake adjustment. This was relatively straight-forward and was managed expertly by Marius in a few minutes. 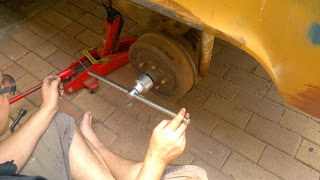 We then dug out the massive 46mm socket and prepared to tighten up the mighty castle nuts on the rear hubs. After application of generous gobs of copper compound we stepped on the newly adjusted brakes, added a long extension bar to the power-bar on the socket wrench and heaved away. The appliance of science! Massive leverage in the form of a one-metre extension combined with the gravitational force of a 120kg neighbour and it's tighter than an elephant's girdle. Finished off by popping in a couple of brand-new split pins (a free gift from the nice people at the Yellow Paint Store, thanks guys). More good stuff! 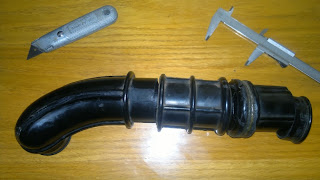 While fiddling about in the engine bay we noticed that the breather pipe connecting the air-filter to the carburettor has split again. (see Clean Air). I chopped it into manageable pieces and trimmed off some excess rubber.

I have bought a bit of clever-bendy-stretchy-wonky pipe from the turbo guys up the road and attempted to fix it again. I'll refit it next week and see if it's going to work.

Right that's about that for now. Thanks for sticking with me so far. I wish everybody a safe, happy, loving and peaceful festive season, cheers for now :)

Travel is fatal to prejudice, bigotry, and narrow-mindedness.
Mark Twain


I've completed the move to my new home, much smaller and neater than the old one. And so has the Marigold Project. Thanks to my super-accommodating neighbour I have managed to squeeze her into a luxurious undercover spot that is warm, dry, windproof and includes another VW granny as company! 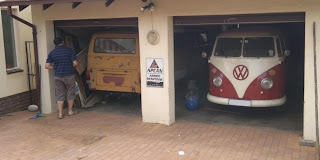 It's a tight fit - the standard garage is 6 metres long and Marigold is now 5.8 without the bumpers or the front spare wheel fitted.

I hope to re-commence work on the project shortly - visit again for updates!

Thanks for stopping by
CooP
Posted by 2 CooPs at 12:24 No comments: