Many people die with their music still in them. Why is this so? Too often it is because they are always getting ready to live. Before they know it, time runs out.
Oliver Wendell Holmes


Bobs what? Dunno really, daft expression. I managed to attack a lot of the small, niggly jobs this week - started some and actually finished some too.

I whipped off the sliding door to reach behind the dents a bit easier. I tapped out the worst of the long dented scratches and sanded off the paint to ready the area for filler. Behind the rivet holes i made up some small glass-fibre patches and fixed them in place with a good gob of resin.

I laid it flat on the picnic table in the garden to blob on some body filler and start the seemingly endless job of sandpapering it to a smooth state. Still lots to do here but at least I've made some progress. 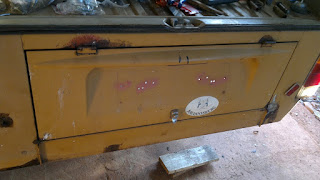 The rear engine cover door had lots of holes drilled in it for the various different registration plates that Marigold has carried over the years.She's had at least one German one, one from Cape Town, an old TJ Johannesburg plate, an old Transvaal plate and a later Gauteng plate. I stripped off the paint from the inside and patched the backs of the holes with small fibre-glass squares and a little resin. After that had cured properly I filled the front side with body filler, sanded it nice and smooth and then slapped on some red oxide primer with an old brush. 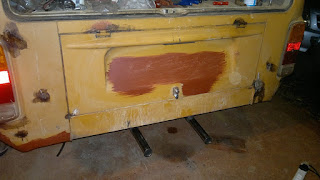 As you can see in the photo I have also fitted the nice, shiny exhaust tail-pipes that I bought from the useful (and now sadly defunct) Beetle Beauties a few months ago. I got hold of a couple of super-strong clamps and tightened them really well. I've also glued them in with a glob of GunGum for a real belt and braces measure. 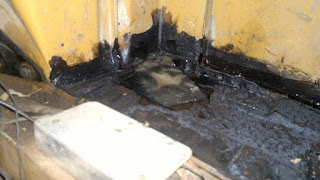 While I was busy with the fibre-glass I also put patches over and under the large hole in the battery tray within the engine compartment. I swept out all of the dust, rust, dead leaves and bugs first. I laid down two good coats of the rust converter liquid above and below and then laid down a good patch on either side of the hole. It's not pretty but it's solid and should last well after a couple of coats of paint. 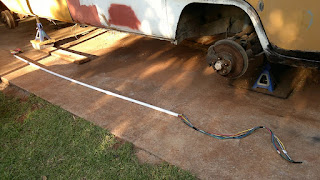 A recent birthday meant some cash came into the project fund (thanks especially to my Dad and my sis xx). I bought some (surprisingly expensive) wire of differing thicknesses to commence building a new loom to run through the underside of the chassis and spread the good volts around. Gonna need a new battery too, sooner or later, but I'll just keep getting each little bit as I can afford it. Any progress, no matter how small, is still progress and is therefore a Good Thing!

I have also torqued up the bolts on the CV joints to the required 25 foot/pounds. Of course, because nothing ever works properly the first time around, one of them had a rounded off hex hole in the top and needed replacing. I managed to find a near exact replacement at a local store without needing to resort to the expensive dealer option. I ground off the slight excess length and it's just right :)

Also done is the bash plate used for protecting underside of the gearbox from rock damage. I gave it two coats of black enamel paint for extra protection and it's neatly fitted and tightened up nicely with new U-bolts.


Thanks for stopping by
CooP
Posted by 2 CooPs at 22:33 No comments:

To change one's life: Start immediately. Do it flamboyantly. No exceptions.
William James


I got the rubber gloves out of storage and had a go at the old fibre-glass patching. After leaving the cab floor to dry and set completely I gave it a bit of hard work with a piece of sandpaper and then dusted off nicely. I have worked once with fibre-glass* before and spent three days itching, stinging and scratching. The tiny little fibres of glass pierce the skin and then stay there, invisible and very irritating. Hence the protective rubber gloves :) 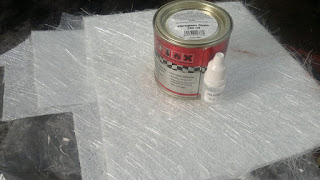 It's pretty easy really, cut pieces of the glass-fibre mat to the required size. Then just add a few drops of catalyst to some of the gooey, translucent resin and stir it up to activate a chemical reaction. This allows the resin to "go off" and set really hard. Too much catalyst and it sets within minutes, too little and it takes days, or never sets at all. I was overcautious and added only half the recommended amount as I wanted plenty of time for my old fingers to work with it. As a result it took over a day to set properly but looks great.

* I believe it's properly called GRP, or Glass Reinforced Plastic 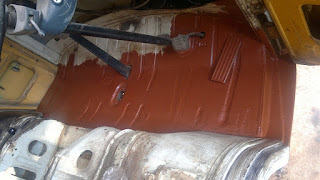 I gave it a quick coat of red oxide primer just to keep the whole area protected and stop any moisture from getting to the recently treated metal areas. I made eight separate patches for all of the different rust-holes that I found in the floor. The largest one behind the accelerator pedal got a double patch - the two layers of matting and the resin combined have made a patch strong enough to support my weight! It's not very well hidden but I'm planning to rubberise and also carpet this area so it's not too important from an aesthetic point of view.


Thanks for stopping by
CooP
Posted by 2 CooPs at 17:05 No comments:

Life is not lost by dying; life is lost minute by minute, day by dragging day, in all the thousand small uncaring ways.
Stephen Vincent Benét


Here we are yet again fitting the engine into place in it's bay. Hopefully the saying proves true - the third time is the charm. The gear linkages are all working correctly now and the gearbox should not need any further work so there shouldn't be any need to take the engine out again. 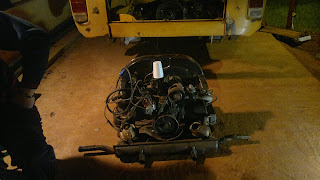 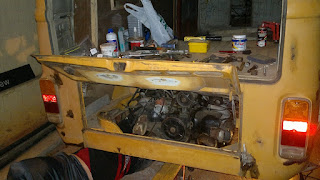 We fitted all of the correct bolts to the re-greased CV joints and nipped them up tight. They still need to be torqued properly but that is a one-man job that I can do later.

I removed the metal strips from the sliding door by drilling out the rivets and smoothing the protruding heads down with sandpaper. I've removed the plywood panel from the inside of the door, and all of the insulation material so that I can remove the other side of each rivet. 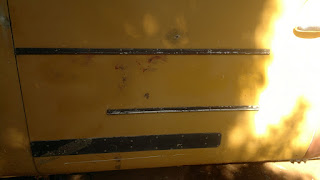 The top one is a support for a shelf made by my dear old Dad. It used to hold cups, glasses, wine boxes etc. The middle one is a support for the original Westfalia table that usually fits to a similar support between the seats inside the bus. The wider, lowest one is to cover up a long dent that was caused at some forgotten moment of miscalculation during the past twenty years or so :) 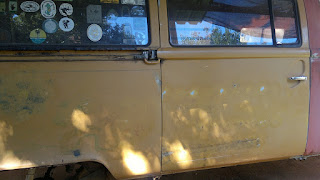 It's already looking cleaner and tidier without those strips, I expect that I won't be replacing them after I repair the damage.

The building crew was here to extend the height of the wall a bit. It should help to keep the Marigold Project and the project workers dust-free, dry and better protected from whatever Mother Nature can chuck at us. 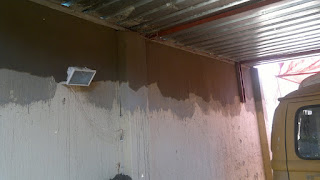 Once the plaster has dried I can give it a lick of paint and it should look like it always should have.  Now I need to get 5 more roofing sheets and finish the covering over the top. Thanks to Dino once more for all the help.


Thanks for stopping by
CooP
Posted by 2 CooPs at 14:49 No comments: 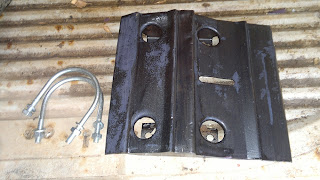 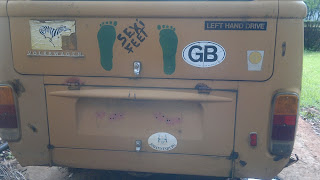 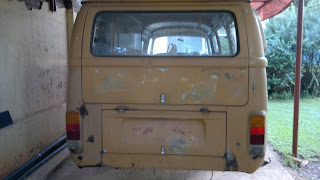 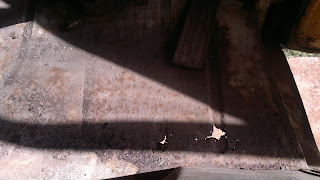 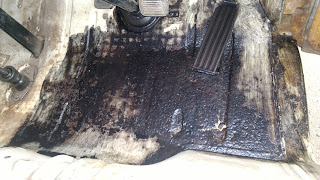 
Thanks for stopping by
CooP
Posted by 2 CooPs at 22:27 No comments: