You only live once, but if you do it right, once is enough.
Mae West


You have succeeded in life when all you really want is only what you really need.
Howard 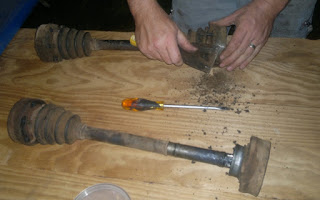 We whipped off the remaining rear axle shaft and stripped the C.V. joints. Careful to mark and number all of the respective parts, we cleaned them carefully and packed them into individual containers. Two of the protective rubber boots are damaged beyond use, the remaining two are probably still servicable. One of the joints looks slightly different to the other three - perhaps it has been serviced or replaced at some time. I asked my Dad but he can't remember ever having done this. 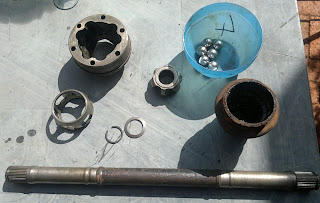 Close inspection shows some miniscule marking on the inner races of a couple of the joints. I doubt very much that this shall warrant replacement but I'll have them checked out by a pro during the week. Usually they are only replaced if badly pitted, very loose or making strange noises. These are fairly snug and ran quietly (when they last moved, five years ago!)

The one with the badly damaged boot had a clump of dried grease inside and is one of the two that has a little scarring. The remainder were packed full of gooey, slimy grease which was a real mission to clean out. New boots shouldn't be hard to source, although my favourite parts supplier has shut down. If someone has taken over the business of Beetle Beauties then please let me know - the shop has been cleaned out and there is no apparant forwarding address.


Thanks for stopping by
CooP
Posted by 2 CooPs at 21:06 No comments:

One who does not know what is enough will never have enough.
Lao Tzu


While I was mucking about fitting new studs under the engine I noticed that one of the rubber boots was damaged and split. This is a protective cover for the c.v. joint* and is crucial for keeping grease in and dust out. I also noticed a huge wasp nest right next to my cheek, just an instant before I flinched violently and bashed my head! Sorry wasps, you'll have to go.

It's a fairly simple job to remove the 6 bolts on each end of the driveshaft/sideshaft and take out the entire assembly as one piece. First we just had to clear decades of solidified gunk from the hollow ends of the Allen-head bolts. 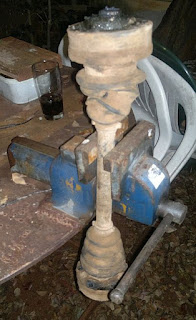 I've clamped it in the vice and removed the retaining circlip and other clamps so that I can remove the protective rubber boot. I'll properly be able to check out the condition of the joint and it's bearings and housings in good daylight, but the grease inside is fairly solid, shrunken and dried out so I reckon I'll have to remove them all and check thoroughly. Hopefully there will be no permanent damage and I can just clean 'em, grease 'em and replace 'em.

*Constant velocity joint, similar to a universal joint that allows a drive shaft to transmit power through a variable angle, at constant rotational speed, without an appreciable increase in friction or play. There is a lovely, moving graphic showing how it works at Wikipedia. Also known as a homokinetic joint (stop sniggering at the back).


Thanks for stopping by
CooP
Posted by 2 CooPs at 20:37 No comments: