Climb up on some hill at sunrise. Everybody needs perspective once in a while, and you'll find it there.
Robb Sagendorph


I've been fiddling and struggling with the new gear linkages for weeks now, on and off. It's been a faff getting the gears to operate fully without the ball of the base of the gearstick popping out of the cup/socket that it's meant to seat within. Here's a pic of the guide plate that is meant to assist with lining this all up (oval plate at bottom of picture). 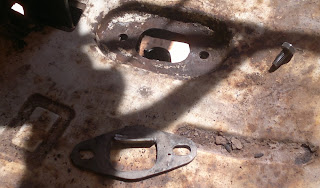 The gearstick passes through the squarish hole in the centre of this plate. The raised section at the right of the centre hole is intended to restrict you from shifting accidentally into reverse. By deliberately pressing down firmly on the gearstick you can then manipulate the stick past this point and into reverse gear.

Examination of the diagrammes in my various user service manuals seem to show that this plate should have a second raised section on the other side. With the aid of the ever-helpful Dino we managed to make and weld on a similar raised bit so that it looks like the one in the diagramme. 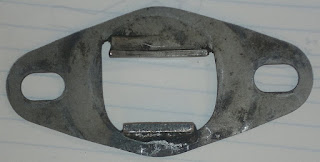 Hard to believe but this simple fix has made all the difference! Wahey! Now all of the gears are easily selected, and exactly where they should be. It's not popping out of the socket and it all feels pretty smooth too. What a relief! Thanks again Dino.

Next challenges are the cable and hydraulic linkages for the brakes, clutch, handbrake, accelerator and electrical components. No problem!

Here's a bonus pic - I went to help Marius last night to get "Flossie" bump-started after a long rest. What a great motivator for me to be able to ride around the suburbs in this lovely old bus. 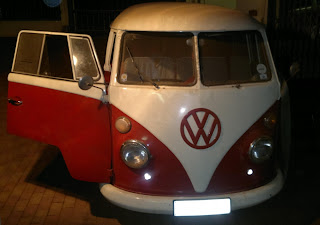 Thanks for stopping by
CooP
Posted by 2 CooPs at 23:57 No comments:


I wrote a short Happy Birthday message last month when Marigold officially became 42 years old. It got me remembering that we had a much bigger celebration the FIRST time that she completed 21 years. VW South Africa used to run a fantastic monthly magazine called Volksie Family that had regular features and interviews of local "Volksies" and their owners. I made inquiries recently with the dealership about getting hold of a back-copy but the current bunch of imbeciles knows nothing of the magazine (although one guy conceded that such a magazine was a great idea). Anyway I digress, at the approximate time they actually ran an article of the birthday party that was held. They took a few photos of the celebrations and held a brief interview with my dear Dad. 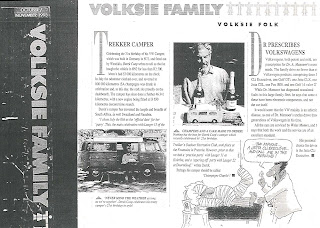 Dad managed to have a Marigold cake made and we cracked a bottle or two of bubbly to celebrate the occasion. He used to celebrate the birthday in July until I did some research on the VIN and the M-Plate and learned to calculate the exact date. The article also mistakenly states that Dad bought Marigold in 1992, which must be a misprint as I have the original bill of sale showing that he bought her in 1976.

Marius came over to help on the project yesterday, as he so often does, but we spent a bit of time on my other air-cooled project and got the entire back axle fitted with new gasket, clean seals and re-assembled. 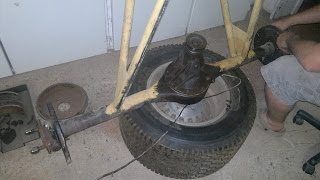 I'll get back to the Marigold Project shortly - I've had a fiddle and made some more adjustments on the front end of the gear linkage but it still pops out of the socket now and again. Frustrating, but it'll have to be sorted out soon, I'll keep on it in my spare time. 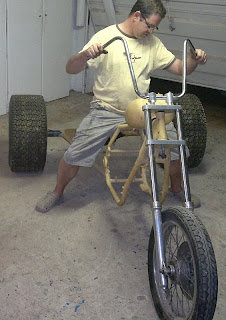 Still a long way to go on this project too - Fred Flintstone here trying out the adjustable seat :)


Thanks for stopping by
CooP
Posted by 2 CooPs at 22:42 No comments: 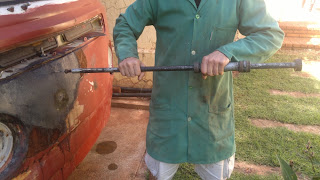 
Thanks for stopping by
CooP
Posted by 2 CooPs at 16:38 No comments: