Every man can transform the world from one of monotony and drabness to one of excitement and adventure.
Irving Wallace


So it looks like I'm moving house soon. This one is too big and expensive so we'll keep it but let it out, hopefully to a family that will appreciate all the space. This means that I am now in a hurry to get the Project back on four wheels again so that she can be moved. 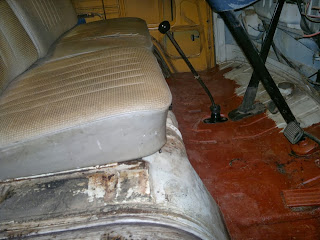 The gear stick and linkages have now all been greased up and re-fitted, all seems to be working fine still and all the gears are there where I left them! The seats are in a horrid state but they will be cleaned up and re-covered before the final fitting. This bus was designed to have a "walk-through" between the seats to allow access from the cab to the rear. The passenger seat is a bench seat though, which covers that gap. The special brackets that support the passenger bench seat across that gap were thankfully made to be used on either right-hand or left-hand drive with a few simple adjustments. Adjustments made and the seats were made to fit and work correctly in their new positions, opposite to their previous left-hand drive configuration.

All of the new cables just need final fitting and adjustment and they are ready to go. I still need to source the sleeve for the accelerator cable but it'll work as-is in a pinch.

The entire project is looking dirty, dusty, scruffy and a general mess at the moment. Not to worry, we'll cover all of this with a few coats of paint in the future. It gets worse before it gets better, so I'm told. 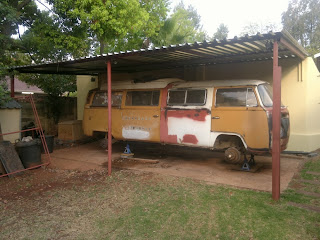 The galvanised metal car-port roof has finally been finished off and is looking pretty good, pat on the back for me as I did almost every part of it completely alone. Pity I'm moving now but I expect that I'll be back to enjoy it in the years to come.


Thanks for stopping by
CooP
Posted by 2 CooPs at 11:27 No comments:

Life is a fatal adventure. It can only have one end. So why not make it as far-ranging and free as possible?
Alexander Eliot


A few routing issues but nothing too tricky and I can announce that the control cables are fitted! Accelerator, clutch and both handbrake cables have been patiently guided into their respective tubes, pipes, slots and holes.

Pictured above is the Bowden Tube, a flexible sleeve through which the clutch cable is routed. It is designed to be slightly bent to help absorb clutch shudder and pedal feedback. It was pretty gunky with over 40 years' road muck but I cleaned it up and removed the worst of it. It was a really tight fit to get the threaded end of the cable to pass through but after some fiddling and the obligatory four-lettered encouragements we managed to succeed.

The accelerator cable seems to be missing a sleeved section where it runs beneath the fuel tank. I can't remember this part but it surely must have existed but there is contact now with the actual cable and the fuel pipe/filter assembly. Will look into it and report back. 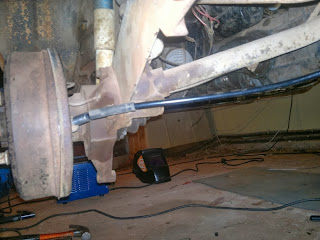 The handbrake cables required longer sleeved sections to be custom-made. This is because they could no longer be routed through their original paths owing to the new chassis beams that were added.

In order for them to be mounted correctly we had to weld up some new brackets and fit them to the chassis cross-member. This was done without too much fuss and the handbrake cables are now fitted, seated and adjusted! 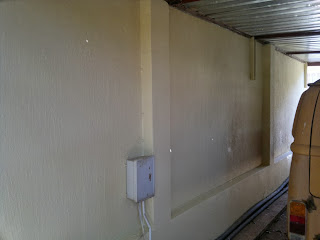 I managed during the week to also complete the roof over the project and then paint the last two coats on the newly-raised wall. Slowly but steadily we are making progress, and getting it all under cover, and under control! 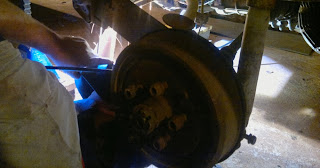 Once again a great big THANK YOU to my friendly neighbour who has been putting in double shifts of late in order to help me speed up the whole project. Welder, fabricator, electrician, moulder, sander, motivator, general genius. Without his help a lot of this would still be just an idle daydream, much obliged mate.


Thanks for stopping by
CooP
Posted by 2 CooPs at 14:25 No comments:

The test of an adventure is that when you're in the middle of it, you say to yourself, "Oh, now I've got myself into an awful mess. I wish I were sitting quietly at home." And the sign that something's wrong with you is when you sit quietly at home wishing you were out having lots of adventure.
Thornton


So... I am pleased to report that the cable expert was a bit more impressed with the second attempt of mine to present my cables to him for extending. Because of my doubts about the accuracy of my measurements I requested him to create the new cables but only to fit one of the end-fittings to each of them. I also requested that he leave an additional 200mm on the cable length to allow for trimming. In that way I thought that I could fit them into their exact positions and mark the precise point where each of the remaining end fittings should be attached. Clever hey?

This is where I discovered that the measuring had not gone as well as hoped. Both of the handbrake cables were somehow way too short! 1.3 metres of gaping space between the tail end of each handbrake cable and the back wheels. That's around four feet in the old money, oh dear, oh dear. I can almost hear my late step-father's mocking voice: "Coop, this time you've made a monumental, right royal, five-star, flag-waving, ocean-going cock-up!"

Ah well, the other two were almost perfect, a small amount to be trimmed and they'll be ready for use. I packaged everything up carefully again with the updated, accurate measurements and schlepped it off this morning to the cable maker in Randburg.

He was good enough to recreate the two new handbrake cables in full and add the remaining fittings to the others while I waited. It all ended up costing a bunch more than I had budgeted for but it's my own fault - for the sake of my sloppy measurements the two handbrake cables had to be completely remade. 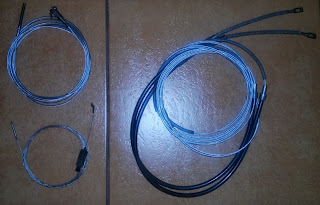 At least they are done now, properly made, custom cables that should last for the life of this bus. They look perfectly good and seem to be very well made. Wherever possible the tatty old fittings have been re-used - cleaned and polished up to look like new parts.

I must extend a special thank-you to Martin Peach for his efforts, his company is called Cable Maker and you can reach him at 082 492 7794 or (011) 787-2995. For very professional manufacturing of any type of cables, window winders etc. I recommend him.


Thanks for stopping by
CooP
Posted by 2 CooPs at 23:53 No comments: