While the engine's out it seemed like a good time to have a closer look at the starter motor. It has been rather erratic since we worked so hard for so long to get the engine running again. Since then the starter only seemed to "kick out" and engage properly about one in five attempts, producing a clank and a whine for the other four.

A strip down showed the damage, I have not done this before but I imagine that this is probably usual wear and tear for something of this age. 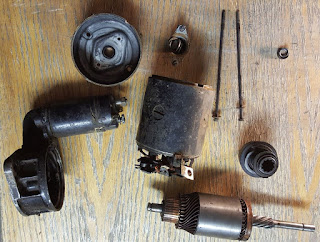 Luckily I managed to pick up replacement bendix assembly from my local Midas spares store, lovely helpful people and good service. The old one is on the left in the pic below, the new one on the right.

Reassembly and testing is planned for the upcoming weekend - onward ho.


Thanks for calling in
CooP
Posted by 2 CooPs at 10:08 No comments:

Kilometres are shorter than miles. Save gas, take your next trip in kilometres.
George Carlin

As I had hoped, we managed to get an early ride to to the east Rand to Volkspares in Jet Park. They have a lovely selection of after-market goodies for air-cooled VWs, both standard original and custom. I chose a neat, light Empi setup for R2000, others varied from R2500 to R4000 and over. 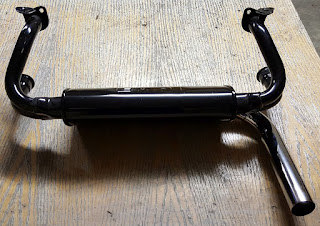 We also made a turn around the corner from there at Pro Auto Rubber, a fabulous resource for all auto-related plastic and rubber extrusions, mouldings, carpets, mats, plugs, stoppers, grommets, clips, rings and so on. I managed to pick up a seal to go around the engine tin to help to keep the engine bay airtight, as well as a handful of other clips and goodies needed to assist with the reassembly. Happy days are here again.

Once again I owe a debt of gratitude to the ever-cheerful and always helpful neighbour - thanks mate!

Thanks for stopping by
CooP
Posted by 2 CooPs at 15:30 No comments:

Return of the lump


I am delighted to announce that the engine work has been completed and the lump has been returned to me, months early and as pretty as a picture. It now has been honed and cleaned and aligned and polished and overhauled and bored and balanced and fettled and lubricated and . . . lots of other fancy words that I can't pronounce. It also has a lovely new carburettor and air filter setup that should be just the job for giving us the extra torque that we need to get this bus up the mountains without too much distress. 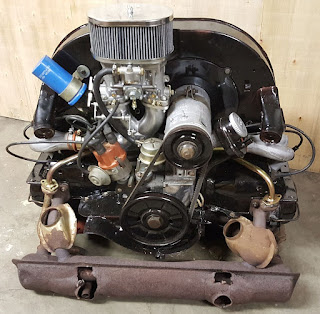 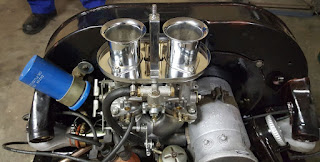 There is a two-page, closely-typed list of all of the tasks that have been completed on the job - it's an amazing list that includes a total of 99 hours of labour! I have been exceedingly fortunate to have had all of this work done at a very low price and in super speedy time by a real aficionado of the aircooled VW. Mr van der Merwe, a thousand thanks to you; I shall be forever impressed by - and grateful for - your skills and knowledge.

All I have to do still is organise a new exhaust as the old one has rotted away. Summat to do on the upcoming weekend, I hope.

An ugly pair of bumpers

I am always doing that which I can not do, in order that I may learn how to do it.
Pablo Picasso


I have been pretty daunted by the massive amount of work that is still to be done to prepare the body for paint. I have had two quotes by professional panel-beaters, each amounting to R35,000-00. Gulp. That's rather outside my meagre budget so it looks like I shall have to have a go myself.

I figured that I could start with summat small, like the wheels or the bumpers and see how it goes. If I cock it all up then there's no real harm done and it can be repaired by a pro later. A lot later. After I have saved up a mountain of cash. So there's the motivation anyway...

Pretty rough hey? They are scratched, dented, twisted, battered and generally quite rough; a bit like their owner. I have a lot to do here.


I started off by separating the bumpers into their individual parts and then sanding and wire-brushing them to remove the rust and loose paint. Despite a lot of bashes the metal seems to be in good condition and the rust is only on the surface. After a bit of thought I decided that I did not want to mount the spare wheel onto the front bumper in future - perhaps I'll stack it up on the rear roof-rack or a waist-high bracket stuck on the back. So the welded-on bracket was ground off and smoothed over. 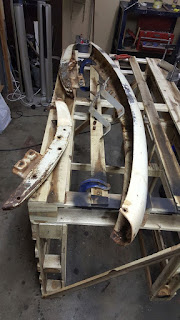 There were many layers of paint which were cracked, worn and faded so I chose to strip it all off of the face sections; those "inside" parts that are out of sight will just be sanded down and primed.

Seems that the old man did some damage to a lot of kerbs and trees, potholes and pedestrians before I inherited this old thing! We got busy with some borrowed panel-beating hammers, sandpaper and wire brushes.

I dug out the mounting brackets from the store. I had cleaned these up previously and given them a lick of good enamel paint. I was also happy to find a selection of brand new mounting bolts and bits which I had forgotten about. Joy, that's one less immediate expense to worry about thanks to my unusual pro-activity!

So I have loosely assembled them to check for obvious major flaws and missing bits - all looking good so far.

Next jobs will be to fill the few minor dings and scratches that remain, then to bang on a primer coat.

Thanks for stopping by
CooP
Posted by 2 CooPs at 11:42 No comments: