Money never made a man happy yet, nor will it. There is nothing in its nature to produce happiness. The more a man has, the more he wants. Instead of its filling a vacuum, it makes one. If it satisfies one want, it doubles and trebles that want another way.
Benjamin Franklin 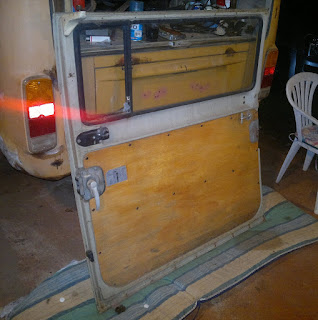 Not much to report this week but we did make a little progress between the slurping supping of some of Cape Town's finest export brandy. The sliding door "slider" has had a damaged spring on it for the past ten years or so. It prevented the sliding door from popping open smoothly when the catch was released and also did not hold the door away from the body panel. This has resulted in awkward opening requiring two hands, and a nasty gouge down the right-hand panel that will need a smear of filler. So we popped the door off and removed the suspect part. I also cleaned and lubricated all of the other moving parts for convenience while we had it all in bits. 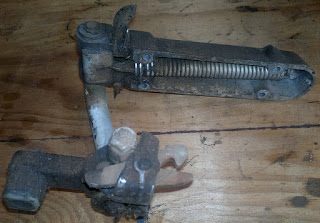 After some exhaustive searching around the house, garden and shed I managed to find the unused slider from the left-hand sliding door that was fixed in place (see SlidingDoor? No More). Couldn't remember where I had put it - they say that the memory is the second thing to go, hee hee. Despite it's grotty appearance it was all in good condition and came up lovely and clean after being attacked with an old toothbrush dipped in petrol. A few of the individual parts are individually made for either the left OR right side but the spring and fastener that I needed was universal. Fixed, fitted and replaced with a dollop of grease and the job's a good 'un. It's working perfectly now, opens smartly and slides just right - it feels like new and is a testament to the original build quality of 40 years ago :)